The DH-2 Death Fuzz is the first pedal by Dirty Haggard Audio, a company based in Portland, Oregon. It’s based on a vintage Japanese Shin-ei Companion FY-2 fuzz pedal, which although a vintage classic did have its flaws. Can this new circuit give you full-on vintage fuzz without the drawbacks?

The DH-2 Death Fuzz is based on the circuitry of the Shin-ei Companion FY-2 fuzz box, used by bands like Jesus and Mary Chain, Joy Division and Radiohead. But Dirty Haggard says it has updated the design to avoid the typical flaws of original versions. Thus, the DH-2 comes with a switchable noise gate, ameliorating the annoying background noise which was often an issue using the original pedals. According to the manufacturer, the background noise is practically gone. 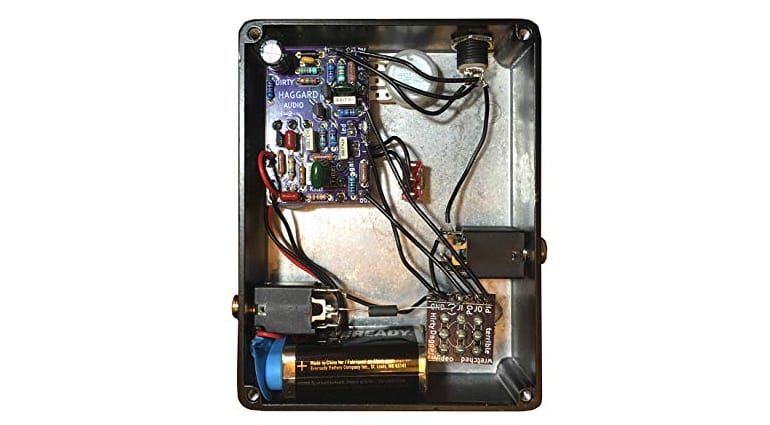 Updated for a modern world

With the help of the built-in filter option, the new edition will probably be more flexible tonally. Users of the original had to live with a permanent mid-scoop in the signal path. The low output behaviour of the original has also been corrected here. The DH-2 should harmonize much better with other effect pedals on your pedal board.

Another issue that’s been tackled is the tendency of the originals to pick up extraneous radio transmissions and to generate additional noise when used with an external power supply. These are all things needing a ‘fix’ in my opinion, so I’m glad they decided to deal with the downsides of this cranky old Japanese fuzz circuit!

The two official demo videos below makes the DH-2 sound pretty decent. I was never a fan of the original Shin-ei versions. I always found them noisy, thin and grating. However, the refinements to the DH-2 Death Fuzz have certainly improved the circuit quite a bit.

It just goes to show that having a vintage original is not always a great thing and that an updated take on a circuit can improve many vintage flaws.