After much speculation, ROLI has revealed the LUMI lighted keyboard. ROLI LUMI is an integrated learning system that consists of the keyboard and an interactive app. It’s gorgeous-looking, but is it really the kind of product that ROLI’s fans were hoping for?

Apparently yes: The Kickstarter campaign, which ROLI has launched to finance production of the LUMI, is on fire. After just a couple of hours, it has already surpassed the funding goal of £100,000. What is getting people so excited about LUMI? Let’s take a look.

ROLI LUMI is a compact, lighted keyboard with 25 keys. Its illumination is easily the most refined that’s ever been in a lighted keyboard, with full-color lighting that extends over the entire length of the keys. I’ll admit that it looks stunning. ROLI says that it is “the brightest keyboard ever made”, and that it even works outdoors.

I’m a bit bummed out, however, that ROLI didn’t make the keys full-size. It’s a keyboard that’s explicitly designed for learning, for what it’s worth. So it would have been the right choice to put in full-size keys so users can easily transition to other keyboards. It doesn’t help that ROLI claims that the LUMI’s keys are “optimized for the average human hand”.

What’s great, though, is that LUMI is easily expandable. You can simply stick together two or more LUMIs, using the same kind of magnetic connectors that also hold ROLI Blocks together. So you can easily turn two octaves into four, six, or even eight. 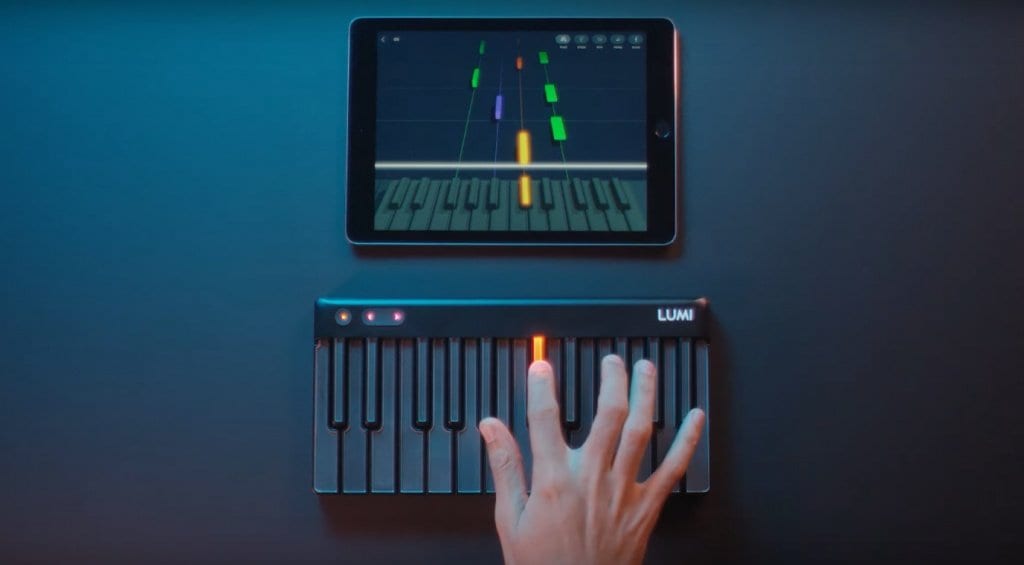 The second component of the LUMI system is the interactive leaning app. And I think that this will be where it is decided whether the LUMI learning system really works. From what we know now, it’s an educational app that lets you play tunes, guiding your hands with on-screen displays and the lighted keys. ROLI says that the app also can teach you jamming and improvising, by lighting up the keys of the correct scale. There also seem to be interactive lessons for fundamental musical knowledge. Apps like this definitely aren’t new, but there was still a lot of room for improvement. With on-screen learning systems like this, it’s always a fine line between simply lighting up keys and actually teaching people how to play. If ROLI has managed to make the LUMI app more interactive and intelligent than its competitors, I think it may very well be fun to play with, and become a success.

The Kickstarter campaign has already reached its goal only a few hours after it was launched. But if you act quickly, you can still grab some of the early-bird deals. The Solo Pack, which includes one LUMI Keys and the app, starts at £131 / USD 164 (including early bird rebate). The Duo Pack with two keyboards is available for £293 / USD 367. ROLI plans to ship the LUMI in October.

The post ROLI wants to teach you music with the LUMI lighted keyboard appeared first on gearnews.com.